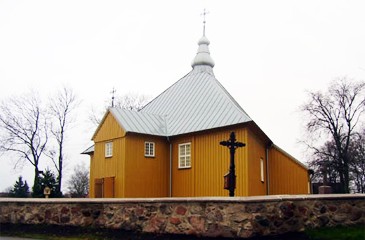 Degučiai St. Vincentas Fereras’s Church is the only remaining triangular wooden church in Europe. A triangular building plan of the church is very unusual and is associated with a symbol of the Holy Trinity. A baroque Degučiai Church was built in 1760. It was built by Vainutas Elder Tadas Bilevičius.
It is believed that the construction of the church may have been induced by “a dark spot of the family”: from the historical sources it is known that a tragedy struck the Bilevičiai family when Aleksandras Bilevičius attacked his brother Vainutas Elder Jonas’s estate and Jonas’s wife Joana was killed during the attack. Thus Aleksandras Bilevičius may have started and his son Tadas Bilevičius completed the construction and equipped the church.
The church has little changed over two hundred and fifty years, although it was renovated four times: 1840, at the end of the XIX century, 1923-1938 and 2011. The internal space of the church is covered by smooth ceiling based on two parallel beams holding the poles. There is a presbytery in the corner in front of the main entrance. Three ornate carved baroque altars are incorporated there, that make a whole art ensemble. The great altar is the most complex and expressive.
There are three still remaining pictures of the upper altar of St. Anthony of Padua, St. Jude Thaddeus and St. Jozeph, painted around 1760-1763, equal baroque ornamental forms of the same size, current titular image of St. Vincent. The latter painting was already considered gracious in the XVIII century. The inventory of 1814 mentions witness of aid to people: one hand and two foot shaped votive offerings.
In 2011, several exterior renovation works of St. Vincentas Fereras’s Church funded by resources of Norwegian financial mechanism were accomplished: the roof changed, the old church repainted, the wooden fence and belfry fixed. While renovating the interior of the church even four layers of paint were uncovered as well as the fragments of the old polychrome decoration of the church. During restoration extremely valuable historical finds were detected: gold thread embroidered church vestments were found between the walls of the building, a consecration cross was found in one of the walls during polychrome research and a rolled up fragment of the XVIII century painting was found in the attic of the church. Even a stone for holy water of this church has a special history that reminds of prehistory of the region.
St. Vincentas Fereras’s Church with sacred art heritage in it is an object of state-protected cultural heritage. The church was declared a cultural treasure in 1963.